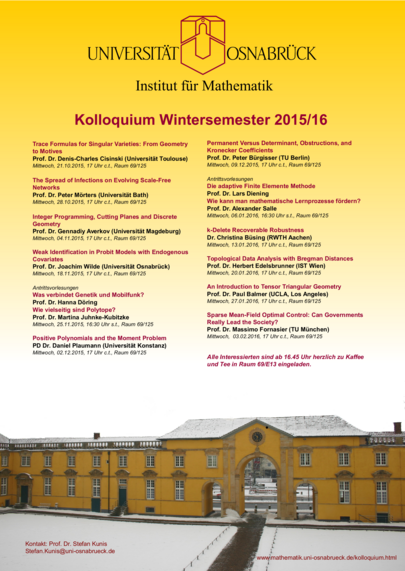 Trace Formulas for Singular Varieties: From Geometry to Motives

Lefschetz's fixed point formula expresses a cohomological invariant associated to an endomorphism of a smooth and compact algebraic variety in terms of geometric properties (the set of fixed points). In other words, the geometrical nature of this cohomological invariant explains its nature (e.g. that we get an integer which is independent of the cohomology we are working with), and conversely, it allows to use cohomology to determine geometrical phenomena. However, the way Lefschetz's fixed point theorem is formulated and proved does not explain how to deal with more general varieties: how to avoid smoothness or compactness. Grothendieck's vision of motives, as developed by Deligne, Beilinson, Voevodsky and many others, lead to a world where such a generalization comes naturally. Motives are both geometrical and (co)homological by nature. This what we will emphasize, by explaining how to interpret trace formulas with mixed motives.

The Spread of Infections on Evolving Scale-Free Networks

We study the contact process on a class of scale-free networks, where each node updates its connections at independent random times. We show that there is a phase transition between a metastable phase, where for all infection rates the infection survives for a long time, and a stable phase, where for sufficiently small infection rates extinction occurs quickly. The transition occurs when the power law exponent crosses the value four. This behaviour is different from the behaviour of both static and mean field models. The talk is based on joint work with Emmanuel Jacob (Lyon).

Methods of mixed-integer optimization are widely used to solve highly nontrivial computational problems arising in applications, whereas the so-called cutting planes belong to the fundamental tools in this research area. I would like to discuss the basics of mixed-integer optimization and cutting-plane theory and demonstrate that geometric insights can help to answer some relevant research questions.

Positive Polynomials and the Moment Problem

Given a real polynomial f in n variables and a subset S of R^n, it can be difficult to decide whether f takes only positive values on S. A common approach in real algebraic geometry and polynomial optimization is to work with representations and approximations of positive polynomials via sums of squares. The quest for a more concrete characterization of the cone of all positive polynomials is also related to the moment problem in functional analysis. In this talk, we will discuss the problems that arise in examples and present some new tools from recent joint work with Claus Scheiderer.

The permanent versus determinant problem is a major problem in algebraic complexity theory, and can be seen as algebraic version of the P versus NP problem. A collection of recent ideas,  going under the name “geometric complexity theory”, suggest to attack this problem by techniques from algebraic geometry and representation theory. I will try to give an introduction to some of these ideas. In particular, will explain the concept of a representation theoretic obstruction and how it is linked to the Kronecker coefficients from representation theory. Recently, surprising insights on the complexity of testing the positivity of Kronecker coefficients have been obtained.

Dealing with uncertainties is an important task whenever minimization problems of real world applications are considered. A classical way to include them into the optimization process is called robust optimization. In robust optimization we choose a solution that is feasible in all considered uncertainty settings and minimizes the worst-case cost. However, this approach leads to over conservative solutions and neglects the fact that solutions can be adapted. The concept of recoverable robustness takes this option into account.
In this talk I will present a special version of recoverable robustness - the so called k-Delete recoverable robustness (k-Del RR) – to deal with cost uncertainties. K-Del RR consists of two stages. In the first stage, a solution is chosen. In the second stage, after the real costs are revealed, the solution can be adapted by deleting up to k elements to reduce the cost. This is motivated by an application in telecommunication where a technology upgrade is refused to a most k customers in order to hedge against the increased cost.
After a short introduction of the problem, we will consider 0-1 optimization problems and their k-Delete recoverable robust version. We prove in the first part of the talk that the k-Del RR shortest path and minimum matching problem are strongly NP-hard and provide polynomial solvable cases. In the second part of the talk we focus on exact algorithms to solve these problems. We will therefore derive several different IP-formulations and provide preliminary computational results on the run-time.

Given a finite set in a metric space, the topological analysis assesses its multi-scale connectivity quantified in terms of a 1-parameter family of homology groups.  Going beyond Euclidean  distance and really beyond metrics, we show that the basic tools of  topological data analysis also apply when we measure distance with  Bregman divergences.  While these violate two of the three axiomatic properties of a metric, they have been found more effective for  high-dimensional data.  Examples are the Kullback-Leibler divergence, which is commonly used for text and images, and the Itakura-Saito divergence, which is popular for speech and sound.

An Introduction to Tensor Triangular Geometry

We shall review the various areas of mathematics where tensor-triangulated categories have emerged, from topology to the theory of motives, via algebraic geometry and representation theory. Through all those areas, we'll identify a unifying theme: the classification of the objects of study through some geometric information. Towards the end, some new such classifications recently obtained in equivariant stable homotopy theory will be presented

Starting with the seminal papers of Reynolds (1987), Vicsek et. al. (1995) Cucker-Smale (2007), there has been a flood of recent works on models of self-alignment and consensus dynamics. Self-organization has been so far the main driving concept. However, the evidence that in practice self-organization does not necessarily occur leads to the natural question of whether it is possible to externally influence the dynamics in order to promote the formation of certain desired patterns. Once this fundamental question is posed, one is also faced with the issue of defining the best way of obtaining the result, seeking for the most “economical” manner to achieve a certain outcome. The first part of this talk precisely addresses the issue of finding the sparsest control strategy for finite dimensional models in order to lead the dynamics optimally towards a given outcome.
In the second part of the talk we introduce the rigorous limit process connecting finite dimensional sparse optimal control problems with ODE constraints to an infinite dimensional optimal control problem with a constraint given by a system of ODE for the leaders coupled with a PDE of Vlasov-type, governing the dynamics of the probability distribution of the followers. The technical derivation of the sparse mean-field optimal control is realized by the simultaneous development of the mean-field limit of the equations governing the followers dynamics together with the Gamma-limit of the finite dimensional sparse optimal control problems.